Within my artistic approaches, the space where the work shown is a constituent part of it, and so the showroom the Byzantine walls provided a unique opportunity, thanks to its dual, single, living in the remains archaeological with the smooth walls of the room.

The city of Cartagena let me emphasize and deepen the parallels in our history with present circumstances. Jump Delphi Cartagena as part of the network of Mediterranean cities where the composed influenced and were influenced by the cultures that were part of this network. While inside nearby places hardly had access to these sources of knowledge open cities open sea to distant cultures lived. The people who got rich off this culturally receding exchange of non. Currently occurs in the gap between people with access to communication networks and those without, causing a technological gap with clear consequences in increasing differences in poor societies and welfare.

In addition this room, opposite the Roman Theater and container from your porch, large network symbolized Rome wove in his empire, Roman communications cartographic build a real tangle of great beauty and, in turn, define the evolution knowledge and identity of the people they reach and their environment. The paradox that the room is named Wall Byzantine archaeological remains but are not, raises an interesting game that reflects reality in countless places but where confusion is not disclosed: Art is magic and plays with deception, not reality is as important as suggesting or stimulates. The art is not objective, are vital vibrations that build stocks.

The concept of transit time and the perception was a key objective. So the first thing the viewer contemplates are a hundred winks in small containers that act as hooks that prevent distant contemplation, it is cheating and which attracts poisonous plant, for its depth, showing various suggestions looking for the connection, identification stimulation. Amid presents one of several concentric networks out of the sluggish next contemplation, to interrupt his way away and bring it back. Immediately eight areas is larger, but within “shrines” in breaking the top of the box to let in light also changing the environment in which it is received. These forms described, appear as exquisite pieces of which are extracted from archaeological remains to be guarded in museums, highlighting and differentiating them from small objects to understand what is significant for instillation.
Containers are broken and sculptural forms, networks symbolizing the emergence of the nodes from the connections. Mathematicians represent traditional communication networks like roots that grow progressively propagating in space. Currently, networks are folded on themselves become areas for the distance becomes relative to the spaces exist between distant connections that are generated before the next. This programming is done irregularly shaped building complex grids in which distant points in closing bind themselves, building what is called the “small world” at distances disappear. But at the same time, these networks increase in size or density as long as the connections are higher. Networks and connections appear concentric or most common paths that generate internal formations, connected by linkages own networks outside the space and based on empathy. In turn, these forms are highly evocative symbol of my obsessions: stem cells, seeds, pupae, atoms, microscopic organisms, chemical formations etc.
In order not to raise proposals closed, but suggestions that articulate these obsessions the following pieces broke its closed nature and revealing hatching inside brass balls: are networks that are deployed, which open and seeds that contain inside DNA can generate new forms insider.

The four large format print images recreate forms give a higher existence as contemplated, as long as such existence generate new representations. To emphasize the concept of time perception unfold elongated containers in which small spheres are displaced inside on scenes that play with perception. It is these which give way to the archaeological ruins beside a silver dial on a red background that appeals to the viewer on the landing of the stairs that lead to the archaeological remains where new areas are discovered with different appearances, sizes and materials. Extremely lightweight objects, made with palillería but occupy large volumes mentioned, bronze balls almost closed ponderous and small, double galvanizing networks containing other small, organic matter … A wealth of tips that rest or fly with respect on the tiles, steps and walls but at the same time confused with them: They play with their membership in that environment, with its existence at that time, stand no earlier views emphasized, reinterpret voids, solids and inter spaces. Get breaking the duality of space and create a new transit linking him was an exciting challenge and vital in my statements. By depositing these works in the archaeological environment, apart from being the very reason for the exhibition itself, allows that only want to see the archaeological site and lose no time in seeing the exhibition are forced to see it to discern what is or is not part of what we have come to discover, when questioned by now are so only answer found in the room. On the contrary, those who often go to see the exhibits without ever repeating his visit to the archaeological remains now are forced to continue their appeal in that space that lives in his memory, which is surprised by elements that are not part of it. I have to admit my satisfaction at seeing different bewitched and intrigued spectators making the trip several times and involving much longer than expected.
An important part of this installation has been conducting their component parts in a craft, in defense of direct contact with reality, which has been involved from the study of the various techniques of basketry to using crochet needles . Similarly, we have tried to take his end that the conditional concept creation, as the networks made despite their complexity developed from a single thread, not for the watermark, but to maintain a sense uninterrupted communication, continuity in space and time. 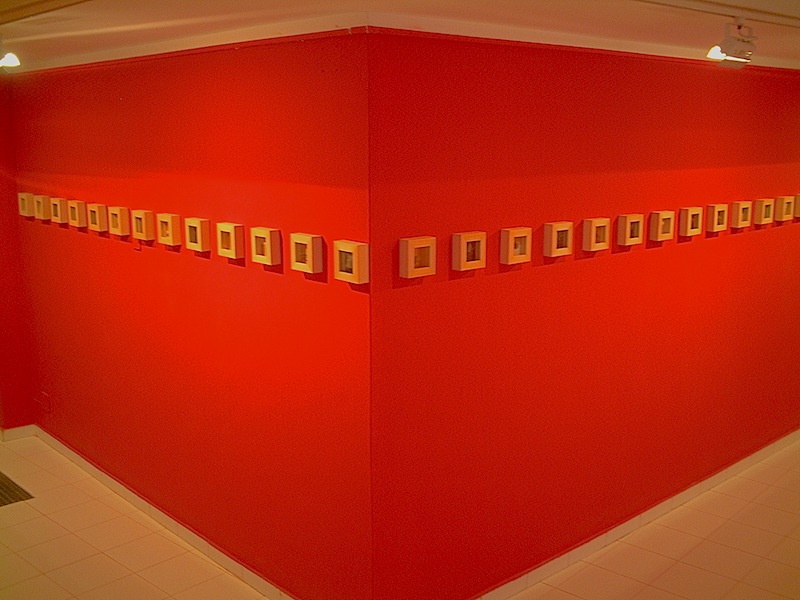 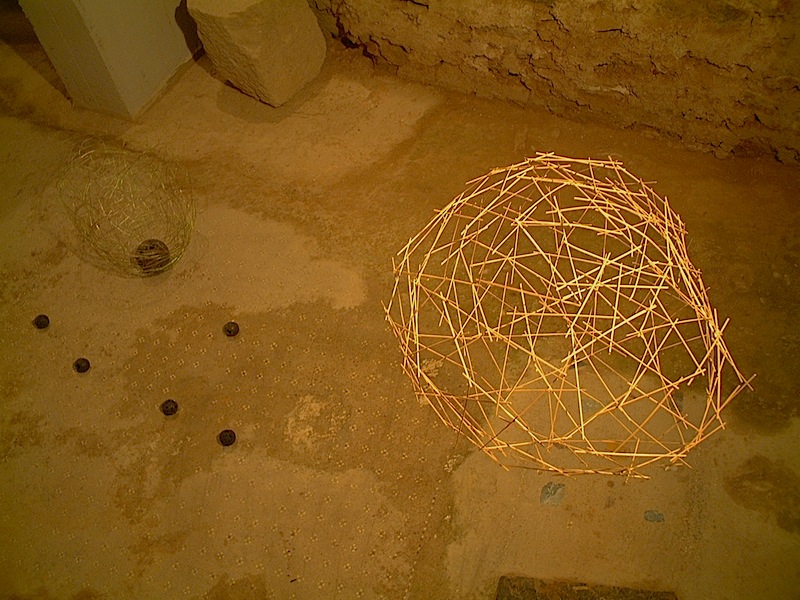