The Constant Evolution of Identity.

Over recent years, a good deal of my research time has been dedicated to the person as an individual being. I have used past experiences to forge a deep understanding of the current situation and the anthropocentric nature of Man, underlining the relative feeling of “centre” that both individuals and groups develop. This concept is altered as soon as links are established; contact with other individuals and social relations open a door to the knowledge of oneself. The flux of knowledge generates networks that help us all to grow, this being the most important aspect: the network, taken as something natural that has always existed, but which has varied noticeably. Such an alteration is due to the fact that the different media have allowed time and space to be re-defined in human relations, currently shortening distances and enabling a massive flow of information. This situation seems to spawn a particular need to stably define who we are and, above all, who we are not.

During a conference I gave in Galway (Ireland), these ideas came to be discussed, and reinforced, when, in a workshop with anthropologists, philosophers and linguists, a debate arose about the natural consequence of Man as something dynamic and unstable. For this reason, I decided, as part of my conceptual work tools, to commit myself and focus my next projects on the “identity as a dynamic entity”, in a constant process of change; aware of the fact that the centre, the network and the identity are inseparable elements. One cannot be comprehended without the others.

There are, of course, those who speak out against this vibrant activity that alters who we are. But it is simply our reality: to change constantly on the basis of our relationship with our surroundings and the knowledge of ourselves. Ideologies have always been in charge of assigning us, as groups, certain characteristics. But this, outside the scope of study, is a way of creating identities that are easy to manipulate. The psychology of the masses clearly establishes that, in order to govern a group, there must exist a sentiment of a common identity that binds it together and allows it to be controlled in a totalitarian fashion against threats from that exclusivist identity. This phenomenon has, nowadays, become even more accentuated, since the individual has easy access to “strange and foreign” influences that cause great wariness in that they are able to break down these traditional identities that have always been situated within a specific environment.

In Nature, the parameter of any being is its ability to mutate. Everything is altered incessantly. Beings are polyhedrons and develop, according to outside stimuli, different facets, changing constantly. But, among my aims, I had it clear that I did not want to make objects that changed before the spectator’s eyes, but, rather, that their condition would stimulate using visual resources: from micro-worlds to macro-worlds, from exclusive proximity to perimeter vision, from descriptive to ambiguous, that traced-out spaces be more important than closed solid ones; movement… For this reason I work with dissociated elements; a fundamental reflection to understand the mutable being, the form as a symbol and distinctive element of an overall reality that constructs a circumstantial world of the memory. States of movement as something that can be observed, that stimulates the mind and is part of an inexorably changing identity that forms part of that personal identity which evolves.

As someone who works professionally with graphic reproduction means, I have come to feel the printing processes as “the absence”, on having been generated by something that then disappears, leaving behind “the presence of what is absent”. This has been one of the principal ideas in my head when creating all my pieces: to work, for example, with the skin shed by a snake; a beautiful thing that is the reflection of something that was and is no more, but something that is now more than it was. It is the real trace of something that is absent; identifiable but containing subtle qualities such as fear, which do not stop us from getting up close and touch it, pick it up and even keep it as a prized treasure, while the real thing actually terrifies us.

In my approach to Art, as an area that allows me to make public reflections that generate opinions, values, aptitudes, etc. for a social change, presenting the observer with situations that evoke thoughts which go beyond the physical reality has become a necessity. I discover a world of indefinite objects with schematic appearances that are dissected and work their way into the memory.

Current technology includes elements that allow previously non-existent images to form part of our visual vocabulary. Those that I use have been taken both from the microscopic world and from astronomy, but mainly using chrysalises, due to their particularly stimulating presence. Looking at them takes us beyond their formal characteristics. We are before something that is apparently static, but which is actually undergoing a process of change: lethargy is a process, its image is the symbol of the ephemeral and mutable, of a dynamic changing identity.

This exhibition contains pieces that form part of a complex project that aims to reflect upon the identity as something that is alive, in constant evolution. Prior to this exhibition, other installations have been carried out in Poland (Krakow and Warsaw) and in Russia (Kazan), where aluminium structures were hung in a variety of different spots, like metal chrysalises invading everyday spaces that are re-interpreted thanks to their presence. These installations conceptually and visually feed the exhibition and vice-versa. The pieces have a real past that fills the reflection with content. In turn, the involvement of other thinkers in my various projects is fundamental. In this case, four people, all lucky enough to have won prizes, have participated:

Emilio Bomant García, who, thanks to his infinite knowledge of words and his work in the Spanish Royal Academy of Language, has written a text that shows the constant evolution of terms; the life and vibrancy that exists in something that, for many, seems to be static, compared with the frenetic changes in other worlds. He shows us how, from this aspect, the universe that is perceived through language is “unstable, changing, dynamic. In this game, the words are an instrument by which to discover reality and, in turn, a reflection of that same reality; or, in other words, they are a litmus paper of reality”.

The prolific Miguel Ángel Moleón Viana begins in a tale-like fashion, where the naked philosopher Diogenes is visited by Alexander the Great in his earthenware vat, to then go on to create a metaphor: “Proud and free, the artist, the poet, the dog measures the refuge which is a whirlwind and the end of all things, but also the womb and origin of all other things. And everything becomes passage and process, gestation, death and birth in a to-ing and fro-ing that is frenetic, calm, from the start to the finish of all things”. Between metaphors and comparisons, the aim is to link these ideas to those of contemporary artistic proposals, developing with his brilliant knowledge of the world of creation a critical stimulating vision of the project.

The philosopher Javier Rodríguez Alcázar, uses his forceful phrase “everything living changes” to begin an exquisite journey among epithets in which he defends that: “Protecting a culture, maintaining it alive is, above all, allowing it to change. Letting it be fertilised by the pollen and sperm brought by the winds and the waters from other parts, allowing its own fruits to roll freely down the hill until someone unknown finds them and bites into them. Our culture is not protected by he who wishes to condemn us to the canon of our tribe, but, rather, by he who allows us to weave new baskets with wicker taken from here and there. The right that collectively helps us to respect our culture can only be upheld if accompanied by our self-imposed obligation to allow it to evolve.”

The composer Estanislao Peinado gives us the score of the main piece used in the video Chrysalises. Its subtlety and exquisiteness both lights up and completes a series of stimulating images and, thanks to its timbre, harmony and synchrony, has managed to create a whole soundtrack in only 8 minutes. A piece that evolves progressively, modifying itself and adding rhythms and insinuations. A video that completes the whole project and aims to give clues and include individual realities to the preceding iconography, thus showing the container, holding the artist himself and his surroundings, which allows to re-encode what we have seen, to appreciate and re-interpret it from a new viewpoint on our journey back.

The works shown aim to continue the reflection by generating a unique world in which appearances are dissected and new realities are created. Those that at first may seem to be static transmit, just by looking at them, an energy that goes beyond their serenity, suggesting their very development. Their presence and the way they appear to the spectator aim to suggest a unique world of chrysalises that, in spite of bearing a specific aspect, can feasibly generate new ones, and fundamentally new interpretations; they are proposals that are open to disquisition, according to the spectator’s experiences.

The exhibition plays with the rhythms and distances of perception, in an attempt to make the spectator move, come in close, step back, find the correct distances at which to understand and empathise with the work. The framed pieces contain real, volumetric objects that are shown dissected, in the form of an analytical sample or study. They become bait that is thrown to the spectators, showering them with ideas that will soak in and involve them in the world they have approached, slowing down and speeding up their rhythm of observation. Some even allow the inner object to move around the surface, revealing different appearances with regard to its surroundings. From this selection, some are chosen to progressively increase their size, until they finally leave their frames and become real facts: we manage to demonstrate the existence of a chimera, so that it can again be analysed, drawn, reproduced and re-interpreted, to end up generating a discourse that is both veracious and close to the spectator.

There are pieces that have been sculpted using basket-weaving techniques, turning the artist into the caterpillar that constructs its own chrysalis with galvanised wires, time being a fundamental factor in the creation, as well as the personal symbolism of going through the whole process of producing a change: personal identity as something that is constantly moving. The idea is that this relationship forms part of a conscious ritual that takes part in the project. These works are, in turn, measure, photographed, analysed and end up evoking other drawings, produced in miniature so that they can by digitally enlarged and presented in uncomfortable dynamic settings. 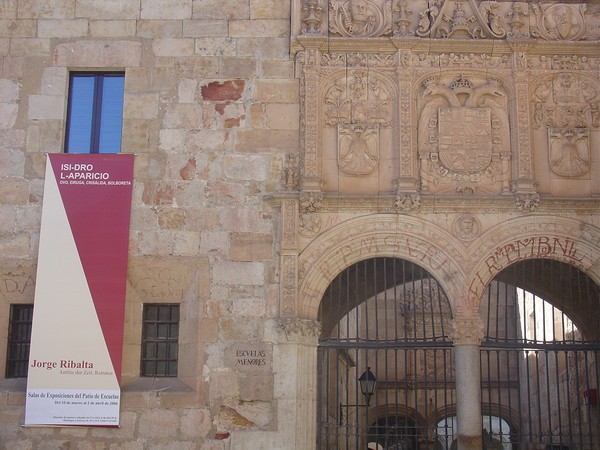